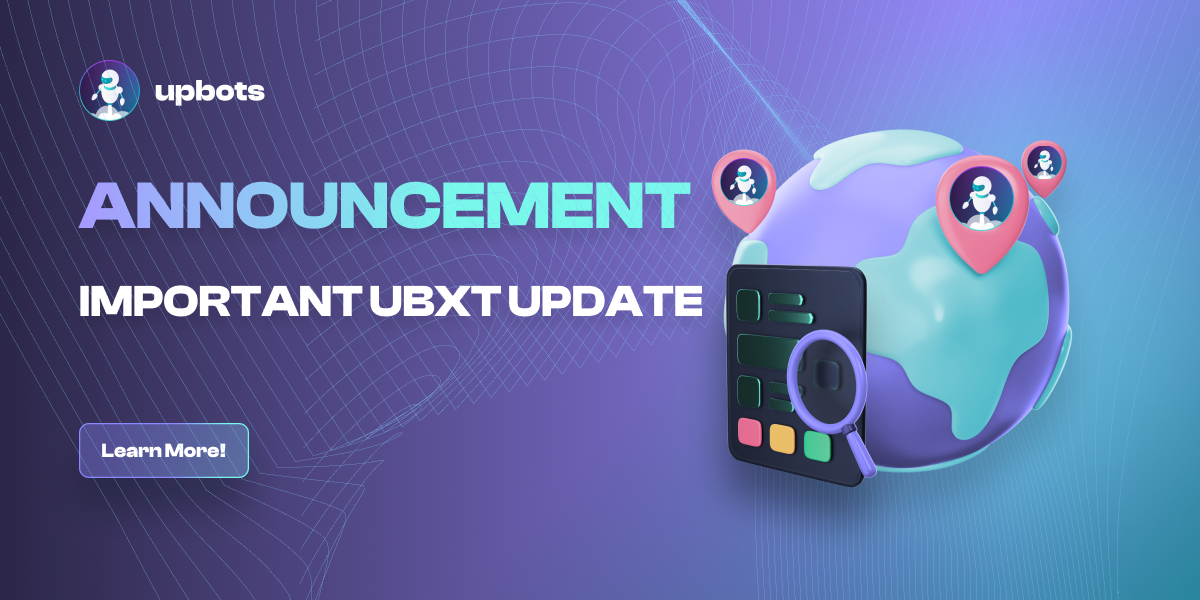 The fall of Alameda and FTX has impacted us and the team has been working hard to find viable solutions for the short, medium and long term.

How did it start?

After a tweet from CZ, the CEO of Binance, questioning the liquidity of FTX, there were massive withdrawals from FTX, effectively leading to the situation where FTX became insolvent and could not continue withdrawals.

More than $2B of liquidity is missing and according to several sources, the probability of recovery is low, unless a deal is made, which is made possible by the Chapter 11 creditor protection system in the US. However, no information in this sense has been mentioned.

SBF has resigned, malpractice has been demonstrated and many companies, including ours, are impacted at different levels.

Due to contractual obligations, a part of UpBots' liquidity was on the FTX. Moreover, Alameda holds about 200M UBXT, that is 2/5 of our tokens, including a big part of which we lent them in order to manage the market making, according to contract.

Considering this, and the possibility of Alameda selling all its liquidity on the markets, our team took the lead in liquidating a large part of the tokens still at our disposal, in order to block Alameda in their resale.

Indeed, being our Market Maker, they are currently the liquidity provider on Sushi and Serum. This way, by withdrawing our own liquidity on DEX, we prevented them from selling the tokens they own (and which they belong to us anyway for a big part), as they would sell them to themselves.

Our mission has been to block their possibility and above all to protect the company, the users and the investors.

In this sense, we were able to act quickly and this allows us to continue today to seek solutions and the plan that we explain below.

1) Preserve our company and keep on building

3) And as always, listening and following the idea that originated in our Community

We announce that we are going to launch the UBXN token, to replace the UBXT.

The old token will be completely replaced and will become useless. In this way, we allow our eco-system to be protected and to move forward without the burden generated by Alameda and FTX.

As a reminder, there is no magical solution. Together with the developers, the community and our lawyers, we have found the least least damaging solution.

Important information about the UBXN token

Holders will be able to exchange their UBXT for UBXN on a 1:1 ratio

Concerning the tokens held by Alameda and belonging to UpBots, representing 100M, they will be returned to the project, and stored in our multi-sig.

The additional 100M +/- held by Alameda will be burned.

Unclaimed tokens will also be burned.

In order to avoid arbitrage between UBXT and UBXN, a snapshot will be taken on November 30, 11:59pm GMT on ETH & BSC.

It will then be possible to swap only the amount you had in your account at the time of the snapshot. The Swap smart-contract will be available on December 1.

For this reason, the current staking pools will be stopped on Thursday, November 17, and we ask our stakers to withdraw their tokens. It will not be possible during the snapshot to differentiate the users of the pool. The UBXN corresponding to the UBXT still present on the staking pool will be burned.

The new tokenomics and new focus

A new token involves a lot of changes in our systems. But it is also an opportunity to improve our tokenomics. The focus will be on burning and making the tokenomics even more solid.

-> 50% of the performance fees received will also be burned.

-> for UpBots, a UBXT withdrawal fee of $10 in UBXN will be asked. This fixed fee will also be burned.

More info about this coming soon.

Info about the process

Concept behind the swap is as follows:

- UpBots uses UBXT that would still be available on DEX (Sushi) and use that liquidity on DEX for the new UBXN pair.

The initial price will be communicated later and the liquidity will be the one obtained with the returned UBXT.

Moreover, by taking a snapshot on November 30, 11:59pm GMT, on ETH and BSC, we prevent arbitrage between the two pools.

Additional pointers to keep in mind:

- The tokens will be immediately available and released

- It is no longer necessary to keep the old UBXT, so don't forget to swap all of them

- Tokens on UpBots, in your wallet, will be automatically converted to UBXN. There is no need to remove them

- You will have 3 months to complete the swap before the contract is deactivated.

Unfortunately, tokens blocked on FTX cannot be converted to UBXN and there will be no exception.

It is impossible for us to confirm 100% ownership and making sure the tokens are not used a second time later. In case withdrawals are allowed again and UBXT are available, we will consider the possibility to swap them. Although we regret this situation, it is unfortunately mandatory as it could lead to a lot of theft attempts.

Nothing. We will take snapshots on November 30, and you will have to use this wallet to convert your UBXT to UBXN. We will check the balance on BSC & ETH. No need to use a bridge.

- If you have UBXT in the staking pools

Remove them before the snapshot, otherwise you won't be able to convert them. This is very important

- If you have tokens on Kucoin

We will provide more information about this soon

- If you have UBXT on FTX

Unfortunately, it will not be possible to convert them without FTX releasing them.

In the days following the snapshot, you will be invited to exchange your UBXT on our Smart Contract. You will then have your new tokens directly at your disposal. Only follow the links and info shared by our official channel.

We will share the SC address for swap in due course.

We believe transparency is crucial and that is why we shared all the above information with you.

We understand that the situation is not necessarily ideal but we assure you that we are doing everything possible to counter this situation created by SBF and its companies.

Launching this new token will probably not immediately raise the price of this one, it will be done with some time, and with the use of our SuperBots and UpBots products. The objective is above all to make our liquidity healthier, and in the hands of our users, with a better tokenomic and less tokens. So we will have to be patient and we count on each of you to talk about our eco-system.

Like you, we are suffering the consequences of these apparent wrongdoings and will continue to fight for this community and our projects.

*The UpBots team reserves the right to modify the above terms and information in the event that the situation changes.

© 2023 Copyright by UpBots - All rights reserved